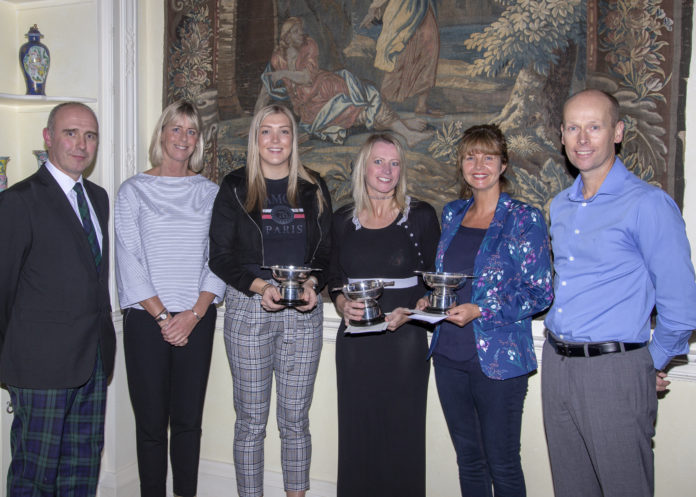 Sporting heroes from around Sutherland were recognised at an awards ceremony at Dunrobin Castle earlier this month.
The Sutherland Sports Council Awards are presented annually to high achieving sports people from around the county.
Sutherland Sports Council chairman Ewen Pryde paid tribute to committee member Campbell Port who sadly passed away just before the awards, saying: “Campbell was due to receive an award for his services to sport this evening for his instrumental role in setting up and running Golspie Rowing Club which has gone from strength to strength thanks to his tireless efforts.
“We are devastated that he isn’t here tonight. He will be a great loss to the local community and we will miss his drive and enthusiasm.”
Along with awards for local athletes, three quaichs, one each for Golspie, Brora and Rogart, donated by the Kilbraur Wind Farm Community Benefit Trust, were presented on the night.  Since the Trust was established in 2010 by wind farm owner Falck Renewables it has made 52 awards of funding to 23 local sports clubs, a total of £263,108.
The Rogart Quaich was presented to volunteer sports coach swimming coach Bridget Morrison.  Brora Rangers Ladies Football Team won the Brora Quaich and Scotland international netball player Bethany Sutherland took home the Golspie Quaich.
Erin Hunter, Falck Renewables community relations manager, who presented the quaichs to the winners said: “It was an inspirational evening hearing about the triumphs of the sportspeople who won awards this year.  They all show a remarkable level of hard work and dedication and we are delighted to help recognise their achievements.”
The full list of winners is:
Female excellence award
Bethany Sutherland: Netball
Male excellence award
Ross Gollan: Hill and fell running
Disability award
Megan Simpson: Swimming
Connor Mackay: Swimming
Junior Female
Gracie Roberts: Gymnastics
Rosie Milligan: All-rounder
Anya Morrison: All-rounder
Morven Thomson: Rugby
Tyler Oglesby: All-rounder
Elise Cozens: Swimming
Amy Urquhart: Rowing
Abbie Munro: Swimming and karting
Junior Male
Danny Doogan : Golf
Service to Sport
Campbell Port
Vintage Award
Gina Rankin
Golspie Quaich
Bethany Sutherland
Rogart Quaich
Bridget Morrison
Brora Quaich
Brora Rangers Ladies Football Team