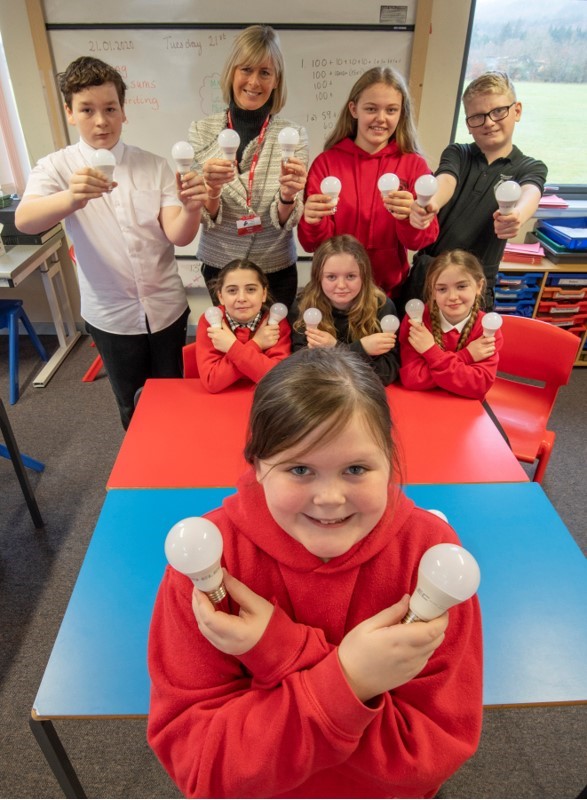 Pupils with a bright idea at Kilchuimen Academy in Fort Augustus are encouraging the local community to be more environmentally friendly with their lighting.

First year pupils at the school are distributing LED light bulbs free of charge to people who live in the Fort Augustus and Glenmoriston area.

Gydja Warmisham said: “When we were in Primary 7 at Kilchuimen Primary School we came up with the idea for a project to replace people’s light bulbs with more sustainable LED ones which use less energy and last much longer.

“We won £1,500 at Falck Renewables Sustainable Communities Awards and also received £300 from the Fort Augustus and Glenmoriston Community Company, which has funded buying the LED light bulbs and we carried the project over to our first year at the Academy.”

Anyone who lives in the Fort Augustus and Glenmoriston can drop in to Kilchuimen Academy and collect up to five LED bulbs or call 01320 366296 for more information.

Erin Hunter, community relations manager at Falck Renewables, owner of the Millennium Wind Farm southwest of Fort Augustus, said: “We were very impressed with the pupils’ idea to help the community move to more sustainable light bulbs and delighted to help with funding to make it happen.”

Angela Williams, chief officer of Fort Augustus and Glenmoriston Community Company (FAGCC) who nominated the project for the Falck Renewables award, said: “We are delighted to support this project which was the brainchild of the local school children. The £300 donated by FAGCC for the purchase of the light bulbs will help reduce electricity bills and reduce CO2 emissions. We wish them every success with the project.”

Read the news on The Oban Times: www.obantimes.co.uk/2020/02/20/lightbulb-moment-for-fort-augustus-pupils/

In the picture, Erin Hunter of Falck Renewables and some pupils of Kilchuimen Academy in Fort Augustus